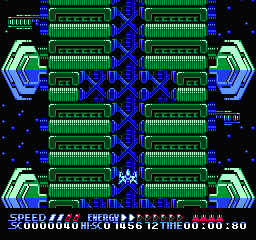 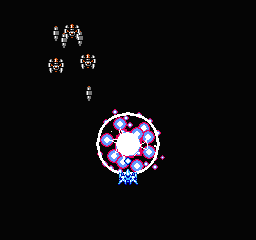 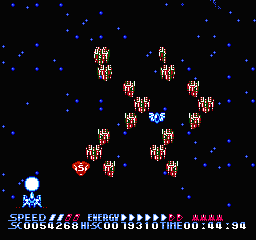 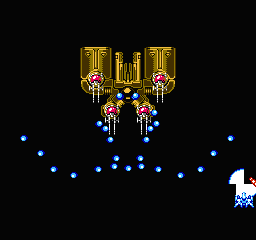 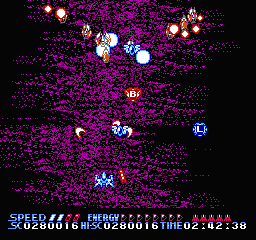 I'll be honest - this didn't really need a "translation" as such I gave it. The current title hack just replaces the twice-repeated "Summer Carnival '92" that hovers above the big title graphic with a translation of the title graphic. I actually spent an hour or two the other night trying to get a good design for the big title going, but then I realized that I just plain suck at art and gave up :p This game -seems- to be built off of a modified Dezaemon FC engine; some of the enemy graphics are ripped straight from Athena's kit, and powerup progression works the same way. Of note though is that this game is far and away more advanced than anything you could ever make with the Dezaemon toolkit.

If there's one word that describes Recca, it is intense. It is EXTREMELY intense. The game has absolutely no problems fitting around thirty moving and animated objects on the screen at once (no exaggeration!) with absolutely NO SLOWDOWN whatsoever. Imagine Gradius with three times the stuff on-screen at any given time and going three times the speed :) It has to be seen to be believed. If you're a fan of games like DoDonPachi and Ikaruga, you owe it to yourself to play Recca! That's the only reason I even spent -any- time on the title hack, the game deserves what little recognition I can give it. Well, what are you waiting for? Go on, go play! Do it now, man!